After its long period of increase through the latter part of the twentieth century, the Newfoundland caribou commenced a rapid decline beginning in about 1996 and has continued to decline, though at a much reduced pace, ever since. In recent years calf survival has improved and, in combination with reduced hunting pressure, has led to a substantial improvement in herd prospects but insufficient as of yet to stabilize population decline. Positive growth cannot be expected until calf survival increases to 40-45%.

Predation accounts for the vast majority of calf mortality and high calf mortality is considered the most important proximate (immediate) cause of the population decline. Predation rates and the number of predator species increased over time with the arrival of the Eastern coyotes in the 1980’s and the phenomenon of bald eagle predation on caribou calves first noted in the 1990’s. Currently, black bear and coyote predation are the most predominant causes of calf death and the high rates of calf mortality have severely restricted herd recruitment rates. The decline in recruitment rate has slowed but at its current average level of ~ 11% recruitment remains insufficient to enable any population increase.

Hunting pressure, while conceded to be additive to natural mortality, is not believed to have initiated the caribou population decline. Nevertheless, until licenses were adjusted downwards, approximately 8 years after the population peaked in 1996, the proportion of the population harvested increased for several years after the decline began. These high rates of harvest (particularly for males) certainly exacerbated the rate of decline and the sex ratio distortion in the population.

Concurrent with the population decline, other demographic traits in addition to poor calf survival were noted: 1) the mean age of caribou increased from the 1980s to the early 2000s but declined thereafter; 2) the survival of older age classes (i.e. not calves) has remained high and constant throughout the period of study; 3) the percentage of males in the adult population, reduced to very low numbers by the early 2000s, increased since 2006 likely because of changes in hunting quotas; 4) productivity declined since the 1970s and 1980s, but this reduction was not consistent across the island, nor were the declines significant enough to explain the synchronous and drastic decline in caribou numbers; 5) the birth weight of calves declined in the 1980s and 1990s, but increased since the early 2000s (heavier calves have a higher probability of survival); 6) adult body size (based on jawbones and antlers) decreased in the 1980s but both increased since the mid-2000s to pre-decline levels; 7) caribou born in the early 2000s experienced accelerated tooth wear when compared with caribou born in previous decades, possibly indicating that these caribou fed on rougher, low quality forage in poor quality habitats; 8) caribou food habits changed over the past 20 years showing reduced use of lichen, a preferred food, and increased use of moss and horsetails, both poor quality forage; and 9) caribou changed their habitat use patterns, site fidelity, and timing of migration as the population rose and fell. These changes together strongly suggest forage reduction, as a consequence of high numbers of caribou in the late 1990s, may have ultimately led to the population decline.

Thus, the best-supported hypothesis to explain the observed trends in the Newfoundland caribou population involves the influence of density dependence. Data on calf survival, reproductive rates, recruitment, spatial use and habitat selection, and morphology all support this hypothesis. Specifically, while predation was the proximate (or immediate) cause of low calf survival, the ultimate (or underlying) cause of the decline was density-dependent forage limitation, induced by high caribou numbers, that led to smaller calves and increased vulnerability to predation.

The Newfoundland caribou population has exhibited a 66% decline in numbers. Based on trends in demography, morphology, space use and behaviour the authors are cautiously optimistic that a halt to the decline is likely. However, rates of calf mortality remain high, predation remains the predominate cause of death, and the island-wide population continues to decline, though at a much reduced rate. Predator manipulation experiments do suggest that improvements to calf survival can be achieved through intensive lethal removal of primary predators, but this management approach would appear feasible only in rather restricted areas. 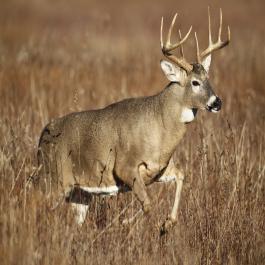